Shayzon and Michael have been married 14 years.  But after a horrendous first wedding, they decided to have a do-over.  Everything that could go wrong the first time, did.  The bride told the florist her only request for her bouquet was that she not use any baby’s breath.  The day of the wedding her bouquet was delivered and made entirely of baby’s breath.  The photographer took pictures for so long by the time they made it to the reception, guests had already eaten and they had time to do only one dance before the venue announced it was time for them to leave.  That said, you’d think they’d have amazing pictures…NOT!  All of the images were either unfocused or taken so far away, it was hard to make out who was in the picture.  Needless to say, Shayzon and Michael have long since wanted a do-over and decided two kids later that it was time.  Arlington walked his mom down the aisle, while London was the ultimate flower girl.  This wedding was more than a renewal, it was their dream wedding.  Enjoy! 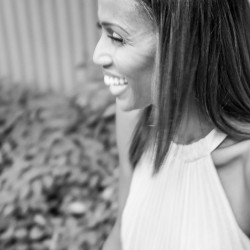 Hi, I am Shaundra of B.Moore Events